Can Christopher and John Ross work together against Nicolas and the cartel?

The games of one-upmanship reach levels high enough to give one vertigo in a tense episode of Dallas in which the Mexican cartel ties up a few loose ends — literally. Cliff Barnes calls Nicolas and Elena to find out why his release from jail is taking so long. Elena informs him that she’s given Pamela his written pardon and now it’s up to her whether Cliff gets out or not. Christopher tries to get Carmen to admit that Nicolas is really Elena’s childhood friend Joaquin but Carmen is too incensed with the Ewings to betray Nicolas’ secret. Christopher can’t shake the feeling that Elena’s in danger but his voicemails on her cell phone keep getting intercepted by Nicolas. John Ross visits Calvin Hannah, the financial manager handling Ewing Global’s IPO and offers him a bribe to ensure that the majority of the shares go to John Ross’ sheik friend. Cal accepts the money, just as he and Bobby planned to give John Ross a false sense of security. The problem is that Nicolas arranges for a banking cohort of his from Mexico to arrive on the scene and fire Cal, paving the way for Carter McKay’s grandson Hunter to buy up a majority of the Ewing Global stock. A rich tech nerd is now in charge of the Ewings’ company! John Ross is mortified at being duped by Hunter and Nicolas working in cahoots, especially after he gets a cryptic text from the sheik’s angry son. When John Ross and Christopher pay Hunter a visit, he doesn’t intimidate easily and needles John Ross about losing the family business much the same way his father lost Ewing Oil to Hunter’s grandpa back in the 1980s. Bobby hopes to have better luck getting to Hunter through his old flame Tracey McKay, who is Hunter’s aunt (played by Nikita star Melinda Clarke). What happened? Did Beth Toussaint, the original Tracey, ask for too much money to reprise the role? Tracey laments that her late father insisted on blaming the Ewings for her brother Tommy’s death and raised her nephew to hate the Ewings, too. She promises to help Bobby. Might she help herself to Bobby, too, for old times’ sake? 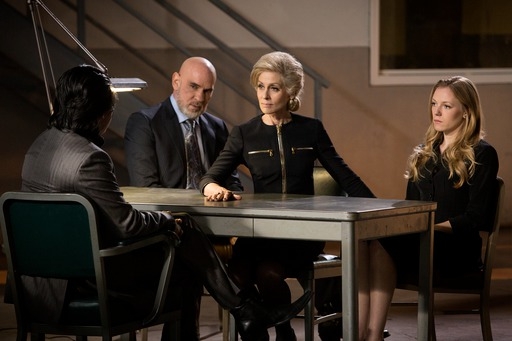 Mother Ryland has bitten off more than she can chew with the cartel.

Sue Ellen advises Pamela to think carefully before deciding whether or not to free her father from jail. Visiting Cliff in Mexico, Pamela asks for forgiveness for helping the Ewings set him up for J.R.’s murder but she can’t forgive him for letting Drew blow up the Ewing rig knowing she was on it carrying her unborn twins. She turns and walks out, leaving her dear old dad to rot in prison. Back in Dallas, the Rylands are having their own set of problems that are escalating by the minute. Ann tells Emma not to let her grandmother know that Harris is working for the CIA and the two make plans to have dinner to work out their estrangement. First, however, Emma must endure the discomfort of seeing her ex-flame John Ross try to extort the Rylands by threatening to bring working girl Candace back to Dallas to share all about their illicit side business. Mama Ryland is neither amused nor intimidated and advises him to return to Southfork to tend to his shattered marriage. Next up for the Rylands is a game of chicken with the cartel boss. Judith renegotiates the deal Emma struck with Luis, promising him she’ll pump up distribution of the cartel’s product by 25 percent if they can find Candace before John Ross. Luis seemingly agrees to her terms. John Ross learns that Bum hasn’t been able to locate Candace but has discovered that Harris is working for the feds. A smirking John Ross surmises that Ryland’s cartel buddies might not be too pleased to hear this nugget of information. He has no idea.

Bobby and Tracey discover how far the cartel is willing to go to cover its tracks when they arrive at Hunter’s pad to discover him hanged! Christopher again tries to warn Elena that she’s in danger only to have Nicolas erase the message. At least Nicolas is alerted about the imminent danger. Harris and Judith get their own gruesome message from the cartel when Luis drops by bearing a mysterious gift box. Opening the package, a startled Judith discovers it carries the severed hands of Candace. To make sure the Rylands keep their end of their bargain with the cartel, Luis shows them footage of a captive Emma and Ann tied up at an unknown location. The stakes, ladies and gentlemen, have been officially raised.