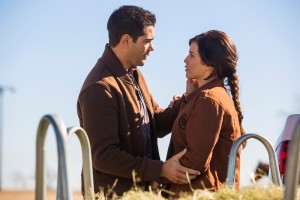 Can Christopher find happiness with Heather and Michael without Bo’s interference?

John Ross’ fantasy turns into a nightmare in a midseason finale chock full of enough OMG moments to fill a year. While my recent critique of the show was an exercise in tough love, I have to admit that the episode delivered some surprising twists that impressed me. The Ramos family saga takes a new path as Elena’s mounting guilt over plotting with Nicolas and Cliff against the Ewings dampens her resolve for justice. Nicolas senses that Elena’s getting cold feet and hatches a twisted new plot to rein her in. He also has to deal with the growing threat from Drew, who visits Carmen at a farmer’s market and gives her a note to give to Emma before running off. Carmen can’t help but feel as if it’s the last time she will see her son. Back at Southfork, Christopher wakes up with a new resolve to leave his tortured recent past behind him and start fresh with Heather, who warns him she won’t let her little boy be hurt by another man in her life. Like clockwork, Heather gets a call from Michael’s school telling her that Bo had picked him up without permission.

Things are decidedly worse for John Ross, who gleefully plans to build a new bedroom for himself and Pamela, unaware that Nicolas texted the footage of him with Emma to Pam’s cellphone. While John Ross relishes irritating Bobby with his construction plans, Pamela is stopped in her tracks by the video evidence of her husband’s betrayal. When Sue Ellen and Ann find her running a bath that’s overflowing, Pamela lashes out at both of them for not telling her of John Ross’ fling with Emma despite knowing about it before their vows renewal. Pamela is humiliated and angry. When Sue Ellen tries to comfort her, Pamela snarls that she’s not a helpless drunk like her. Sue Ellen immediately goes on a bender.

Bobby is just plain angry when he hears about the brouhaha and tears into Ann for keeping him in the dark about yet another important event affecting their lives. Ann confesses that she’s embarrassed by the whole thing and wanted to protect Pamela, but her explanations fall on deaf ears. Bobby demands Emma move back to Harris’ home and storms out. Ann is crushed and feeling just a bit angry. Later at Harris’ house, Ann and her ex are momentarily drawn together by the strife in Ann’s marriage. Harris steals a kiss, which nearly causes Mother Ryland to have heart attack as she nervously takes in the scene.

Elena will be losing her svelte figure soon if Nicolas has his way!

While his marriage implodes back at the ranch, John Ross pays Candace a visit as she’s packing to move out of the fancy house she can no longer afford after getting fired by him and Harris. Bum discovered that Candace was a hooker and John Ross uses the dirt to get her to share the Rylands’ plan to frame him with the Lewinsky dress. John Ross next visits Mama Ryland and suggests they stay out of each other’s way. He admits to Judith, however, that his intentions toward Emma aren’t honorable and Emma hears the whole thing from a hidden room behind a revolving bookshelf. The Rylands’ whorehouse has more gadgets than a James Bond movie! Undeterred by John Ross’ candor, Emma moves to finish what Candace started and summons him to the Omni hotel where she’s rented a room. Nicolas also plans to use sex to control his lover and pokes holes in Elena’s diaphragm! Does he plan to keep her barefoot in the kitchen, too?

Christopher, Heather and Bobby find little Michael at a rodeo where Bo’s brother tells them Bo is intent on retaliating against the Ewings for taking his job and family. He’ll have to get in line. At the Omni hotel, John Ross finds his mistress decked out in his favorite green bustier. While he and Emma get down to business, Pamela tracks him down using GPS and confronts them. The lovers fear she’s packing heat, but soon discover it’s heat of a different sort when she removes her trench coat to reveal she’s wearing the same lingerie Emma has on and suggests they have a three-way! Emma’s game but just as things are reaching fever pitch Pamela begins to have convulsions. Emma calls 911 and discovers that Pammy was doing pills.

Back at the ranch, Sue Ellen is drinking herself into oblivion when a fire breaks out in the house. Bo is on the premises but did he do the deed or did the vengeful Drew do it? Bobby and Christopher have no time to figure it out as they race to rescue their family just as they’re struck by falling debris!

Will Elena get knocked up? Is Pamela a goner? Who will survive the latest Ewing house inferno? Tune in August 18 when Dallas returns for the final seven episodes of the season.