Will Christopher regret getting involved in Heather’s problems with Bo?

There’s a whole lot of blackmailing going on in tonight’s episode, which sees the tide turn against John Ross, who’s outmaneuvered Bobby in the fight over his drilling on Southfork,.. or so he thinks.   Outraged over her son’s illicit affair with Emma right underneath Pamela’s nose, Sue Ellen puts in motion the first of the night’s blackmail schemes by asking Senator Sam McConaughey (Steven Weber) to replace Stanley Babcock with a railroad commissioner who will rescind John Ross’ drilling permit. When the senator refuses to fire his friend, Sue Ellen gives him a bottle of J.R. Ewing bourbon and warns him that John Ross has dirt on Babcock’s affinity for “doggies.” He took the bait, she gleefully tells Bobby on the phone. At Ewing Global, John Ross gets read the riot act from Christopher, who learns from Heather that John Ross is firing ranch hands to advance his fracking on Southfork. Pam, meanwhile, notices that Candace is very touchy feely with her husband. Although Heather and Chris agree to keep their relationship casual, Chris is drawn further into her life when she gets a call about her little boy during their date. We learn that Heather used to be married to Bo McCabe, the uber-tall ranch hand that’s in John Ross’ back pocket. Something tells me there’s trouble ahead for this trio. Nicolas and Elena get a lawyer with an old grudge against J.R. to help then unearth the files on J.R.’s murder. They discover a photo of a cadaver with a suspicious incision mark in it. It’s not a bullet hole! 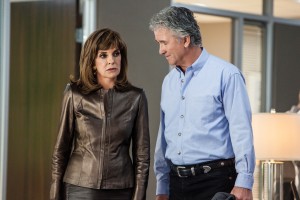 Sue Ellen and Bobby pulled a J.R.-worthy trick on John Ross. Will they regret it?

John Ross pressures Emma to award Ewing Global some of Ryland Transport’s shipping contracts and Ann catches him coming out of her daughter’s bedroom during the day. An angry Ann confronts Emma, who unleashes a torrent of cruel insults on her mother, who’s pushed to banning her from Southfork. After cooling off, Ann reaches out to Harris, who surprisingly shows his ex-wife some sympathy and tells her not to blame herself. He then takes his turn at blackmail to force his contact at the CIA to get Ann and Emma extra security. Emma, however, doesn’t seem to be too worried about having the cartel gunning for her when she meets Mama Ryland for drinks. A cool-as-a-cucumber Emma tells Judith she has plenty of dirt on her grandma’s side business — the brothel — and forces her to let John Ross use Ryland Transport’s ships. A shaken Judith — trembling with rage — warns her smitten granddaughter not to let Ewing use her. After all, why would he buy the cow if he’s getting the milk for free? Later, she tells Harris they have to speed up their plan to catch John Ross with his trousers down with Candace to drive a wedge between him and Emma. It had better be a big wedge since Miss Ryland and Mr. Ewing are busy celebrating their newest business deal with a tumble in the sheets. They agree, however, to be more discreet and Emma fools Ann into believing she’s given up John Ross. Ann admits to Harris she’s not so sure Emma’s not lying again.  In Austin, Sue Ellen springs her trap for Senator McConaughey as he and Stanley Babcock discuss the messy details of their past double-dealing unaware that Mrs. Ewing and Bobby are parked in a van outside taping their conversation through a recording device Sue Ellen had placed in the cork of the bourbon bottle she gave the senator. “The family that blackmails together, sticks together,” she says with a wicked smile. Evidence in hand, Sue Ellen gets McConaughey to replace Babcock with a new railroad commissioner — Bobby — and notifies John Ross about her move via text message. Seeing Bobby introduced as the new commissioner on the news throws John Ross into a fury. There will be hell to pay soon!