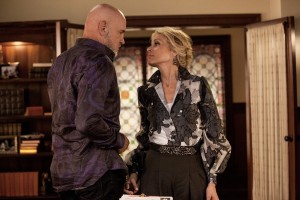 Mama Ryland (Judith Light) is back to clean up Harris’ mess, or so she thinks.

John Ross’ convoluted love life gets closer scrutiny from a boozing Sue Ellen, who hires Bum to keep tabs on her son and Emma. Bum gets right on the job and immediately produces juicy photographic evidence of John Ross’ infidelity but instead of squealing on him to Sue Ellen, he confronts the cheater with the photos and warns him not to follow his daddy’s well-worn path to empty years of cheating. Emma has troubles of her own when she discovers her father has been released from the big house and is intent on regaining control of Ryland Transport. Harris threatens to lock his treacherous daughter in an institution like he did his mother and Emma’s response is to break Mother Ryland out of the rehab clinic. Judith plans to make everything all better for her son, who’s been a very bad boy! Bobby and Ann, meanwhile, are aghast to hear Harris is back on the street so Bobby contacts a senator who’s friendly with the Ewings to look into the events that led to Harris’ ouster from prison. Sue Ellen’s not the only one keeping a watchful eye on the straying John Ross. When John Ross charms his Ewing Energies secretary Candace into spying on Christopher’s project with nerdy seismic reports expert Howard, Pamela notices how her husband enjoys his cloak-and-dagger routine a little too much. Flirting isn’t cheating, John Ross reminds his suspicious wife. He’ll have hell to pay if she discovers evidence to the contrary, Pamela promises her bemused — and flattered — husband. John Ross tries to bribe Howard into doctoring his seismic report on Southfork to show that the shale in the land lies within John Ross’ property rights. Although Howard confesses the scheme to a not entirely shocked Bobby, the results indeed support John Ross’ case for fracking on the ranch to get money for Ewing Energies’ much-needed oil deals. 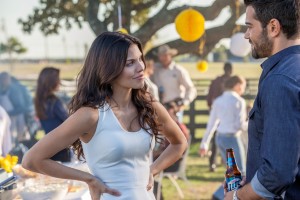 The annual Ewing barbecue is the setting for some intrigue as newcomer Heather reveals she cleans up nicely and engages in some flirtatious two-stepping with Christopher. Spying John Ross chatting up a pretty blonde, Pamela takes Nicolas for a sexy twirl on the dance floor to remind John Ross that what’s good for the goose is good for the gander. Nicolas, however, is more interested in playing mind games with Chris, who continues to try to get information about the mysterious tycoon. All he has to do is ask Carmen, who is none too pleased to learn that Joaquin is masquerading as Nicolas to pull off a scheme against the Ewings. Despite her loyalty to the Ewings, she keeps mum about his true identity but warns him not to lead her children down the wrong path. Down in Nuevo Laredo, the Rylands meet with the leader of the cocaine cartel and Mama Ryland cuts a new deal with the drug lord. While Mama expertly samples the cartel’s wares, Harris gets the action on tape! They might run into Christopher on their way back since Chris is dispatched by Bobby to dig up dirt on Nicolas in Mexico. Little do Bobby and Chris know that Elena has hacked into Bobby’s computer and is sharing evidence of the Ewing plot against Cliff with Nicolas. Bobby’s push to get to the bottom of Harris’ release from jail draws the attention of a CIA agent who has Bobby and Ann brought to a secret location and reveals that Harris is an agency plant within the cartel. He’s working on the side of the good guys! Or is he?