Afton Cooper (Audrey Landers) rushes to Pamela’s side at the hospital.

The Dallas set morphs into Grey’s Anatomy as nearly every character ends up at Dallas Memorial in the wake of the explosion on Christopher’s methane rig. The chaos following the explosion reveals that all the Ewings and their colleagues survived but Pamela receives a serious injury that imperils both her and her babies. Her attending physician informs her and Christopher that she experienced an abdominal aneurism and that a separation in her placenta makes the probability that she can carry the twins to full term highly unlikely. She advises they terminate the pregnancy and Pamela hysterically begs Chris to save the babies at all costs. Chris blames himself even though Bobby and Elena tell him its unlikely he would have taken a risk with everyone’s lives if he weren’t sure the rig was safe. Elena has a specialist brought in from Austin to attend to Pamela. Also arriving on the scene to care for Pamela is her mother Afton Cooper (Audrey Landers), whom John Ross called. The sexy blonde is a blast from the past who gets a chilly reception from Bobby and Sue Ellen, who remember her hijinks with J.R. and Cliff back in the ‘80s. Afton tells her daughter she warned her about getting involved in Cliff’s schemes. She also shows she still has a talent for sniffing out scoop by overhearing Christopher and Bobby’s confrontation with a representative from TESHA who tells them he suspects too much pressure on the methane may have caused the explosion. A livid Afton confronts Chris just as Pamela Rebecca doubles over in agony. The doctor rushes into action to save her and the babies. John Ross tells Christopher it will be his fault if any of them dies. John Ross also rebuffs Emma’s attentions, which is just as well since she has to attend to her grandmother, who is also at the hospital after falling down the stairs at Harris’ house. Harris begs his mother to forgive him but she makes him swear to repair the rift between her and Emma before she will consider reinstating him as head of Ryland Transport. When Emma visits Mother Ryland, her grandmother tries to turn her against her father but Harris arrives in time to arrange for his mother to get a healthy dose of morphine, but probably a lot more than she had expected. The next morning Emma returns to find her grandmother’s hospital room empty. Harris arranged for her to convalesce at an unknown location with plenty of medication to keep her from feeling “discomfort.” With John Ross distracted by Pamela’s health emergency, Emma turns her attention to Drew, whom she interrupts while he’s packing to leave as Roy Vickers had demanded. She manages to make him feel better about himself and spends the night, giving Drew inspiration to confront Vickers and threaten to bring him down if he gets the blame for the rig explosion. Drew plans to stick around Southfork a lot longer! 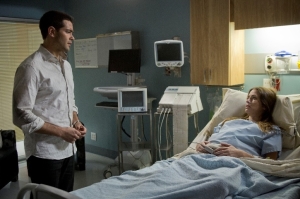 Will losing the babies unite Christopher and Pamela or tear them further apart?

Sue Ellen, meanwhile, makes a move to get the inside track on the investigation into the explosion. Among her many political connections is Ken, a TESHA board member played by 1970s TV icon Lee Majors, who starred in The Six Million Dollar Man. Sue Ellen bats her big Sue Ellen eyes at Ken and gets him to report that TESHA’s investigation indicates there were two explosions involved, hinting at sabotage. John Ross and Christopher surmise that Cliff was plotting to devalue Ewing Energies altogether. At Southfork, Bobby receives another mysterious package with information about his ex-wife Pam. He shares with Ann that Pam apparently traveled to Abu Dabi in 1989 with a man assumed to be her husband. Ann isn’t too thrilled to see Bobby’s reignited interest in knowing Pam’s whereabouts but the fate of Ewing Energies may depend on tracking her down. Back at the hospital, Pamela’s worst nightmare comes true as the monitor tracking her babies’ heartbeats flatlines!