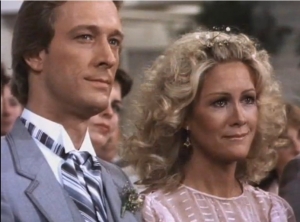 Gary and Valene’s last appearance together on Dallas was at Lucy’s 1981 wedding.

The March 4 episode of Dallas will feature an appearance by Ted Shackelford as J.R. and Bobby’s brother Gary, whose history with his family is marked by pain and resentment. Gary is set to side with Bobby in a standoff with John Ross and Sue Ellen over control of Ewing Energies. There was a time when the mere mention of Ewing family business would send Gary running for the hills. The years have changed him and it will be interesting to see what the Gary Ewing of 2013 is like. Back in 1978, he was a mess. Growing up on Southfork, Gary suffered from classic middle child syndrome. Taking after his mother Miss Ellie, he was introspective and sensitive, qualities that made him weak in the eyes of his father Jock and his older brother J.R., who was heir apparent to their ambitious, Alpha male dad. Baby brother Bobby, being equal parts Jock and Miss Ellie, was the only male in the family who understood and supported Gary. Miss Ellie also adored him, but it wasn’t enough. Gary fell in love with sweet Valene Clements, a teen whom he got pregnant, and they wed against the family’s wishes. Gary couldn’t handle the pressures of being a Ewing and developed a bad drinking problem. He abandoned Val and their beautiful daughter Lucy (Charlene Tilton). When Val fled Southfork with Lucy to Virginia, J.R. hired some goons to bring Lucy back to Dallas and banished Valene from her life. It wasn’t until Lucy was a college student that she made contact with her parents again. Although J.R. tried to interfere, Miss Ellie and Bobby succeeded in reuniting Gary and Val (Joan Van Ark) and they remarried in 1979, starting a brand new life in Knots Landing, California. That’s when the real trouble started. Gary and Val were misfits in their new environment, surrounded by three couples at various stages of married life: Sid and Karen Fairgate, a happy couple with kids, Richard and Laura Avery, a miserable one, and newlyweds Kenny and Ginger Ward. The Knots Landing cul-de-sac was a hotbed of drama, even if its residents weren’t as wealthy as the Ewings. Gary and Val’s brittle marriage was tested from the moment they settled into their new home. The Fairgates extended a helping hand and Gary joined Sid’s automotive business Knots Landing Motors. Big trouble arrived in 1980 when Sid’s aptly named sister, Abby Cunningham, spotted Gary and saw Ewing dollar signs. The ambitious blonde, a recent divorcee with two children, did a round of strategic bed-hopping, sharing a hot tub – and more – with Richard Avery while Gary fell into the arms of Judy Trent, the wife of a fellow AA member. Abby knew Judy would crack the foundation of the Ewings’ union enough to let her shatter it altogether and take Gary as her second husband. Becoming Mrs. Gary Ewing was a pivotal strategic move for Abby, who parlayed her Ewing tie into her own real estate empire.

Abby Cunningham set her sights on Gary in 1980 and built an empire after stealing him away from poor Val.

Abby and Gary’s relationship was passionate but rocky due to her incessant manipulation of him. Although Abby inspired Gary to become a stronger man with an interest in business, he saw through her eventually and never really got over his deep connection to Val. As the Ewings built their business interests, temptation reared its ugly head. Gary joined Kenny in a music industry project involving Ciji Dunne (Lisa Hartman), a sexy rock singer whose arrival in Knots Landing caused waves among the residents and eventually she was murdered by evil Chip Roberts, the suitor of Karen Fairgate’s annoying daughter Diana. Ciji’s shocking death sent Gary into a depression until one day he came upon Cathy Geary, a “dead” ringer for Ciji. Although Cathy came with her own set of problems, she managed to survive a long run in town. Unlike Ciji, Cathy made it to bed with Gary, paid by Abby to keep him distracted while she exerted more control over their business and hit the sheets with political candidate – and future Knots Landing mogul – Greg Sumner.

While Gary shuttled between Cathy and Abby, Val moved on with Ben Gibson (Doug Sheehan) until he went missing. Gary’s next conquest, Jill Bennett, was fresh from a dangerous flirtation with Karen’s second husband Mack MacKenzie, and ready to become Mrs. Ewing #3 once the ink on Gary and Abby’s divorce papers dried. As Abby pointed out, however, the first Mrs. Ewing never would go away. This detail started to grate on Jill. Every time Gary ran off to rescue Valene from her latest catastrophe (and there were many), Jill descended further into madness. Eventually Ms. Bennett tried to kill her rival in a farfetched plot involving a bad wig, janitor’s gloves and sleeping pills she forced Val to swallow. To Jill’s shock, Val survived and it was Jill who ended up dead in a car trunk (the loony bird offed herself and tried to set up Gary for the deed after he dumped her). Gary’s reunion with Val was further delayed by her involvement with psychopath Danny Waleska while he picked up with Danny’s boring ex Amanda Michaels.

Driven nuts by Val’s eternal hold on Gary, Jill Bennett donned an unflattering wig in a wild plot to kill her annoying rival.

After a brief reign of terror over Val, Gary and other Knots Landing residents, Danny ended up floating face down in a swimming pool and Gary and Val were finally remarried (again), just in time for her to disappear for a year during which Gary took up with Claudia Whitaker’s daughter Kate (Stacy Galina), who bore a striking resemblance to her uncle Greg Sumner’s late daughter Mary-Frances. Although sweet, Kate failed to generate the chemistry with Gary that Val and Abby had, but she ended up pregnant by him by the time the show ended its run in 1993. Kate ironically ended up with Abby’s son Brian Cunningham and when Val returned – she had been on the lam from a mysterious crime syndicate – she and Gary resumed their lives on the cul-de-sac with their twins Bobby and Betsy. Twenty years later, it will be interesting to see how their marriage has held up. Is Gary still sober? Is Val still a successful novelist? Tune in and find out!

UPDATE: Gary and Valene also appeared on the final “alternate realities” episode of Dallas in 1991, which in my opinion doesn’t really count for the Dallas history. Gary also made a lone appearance at Bobby’s funeral during the infamous 1985-1986 Dream Season. It will be good to see Gary and Val together on Dallas in “real time” when Joan Van Ark makes her guest appearance later this season.