Harris Ryland’s plan to destroy Ann scores another victory as Mrs. Ewing jumps out of the frying pan and into the fire in a tense episode filled with courtroom drama. Ann determines to get Bobby off the hook for shooting Harris and confronts her dastardly ex in the hospital only to be hauled away by security. Emma overhears Ann confess to attacking Harris and wishing he were dead. When Emma questions why Harris put the blame on Bobby he tells her he was confused after his ordeal. A dejected Ann glances at her boots and realizes they’re evidence that will link her to the crime so she takes them to the police and confesses. Sure enough, Ann is brought up on charges. She hopes a trial will at least force Emma to listen to the truth about her father and grandmother. A month later, the trial begins and Judith is the first witness, testifying with gusto, painting Ann as a gold-digging tramp who took advantage of her precious son. The judge has her escorted off the witness stand to cut short her overzealous testimony. The courthouse is also the scene of a series of confrontations unrelated to Ann’s case. Sue Ellen insists J.R. forgive John Ross for telling Cliff about his plot to use Frank against Pamela. A noticeably pregnant Pamela agrees to be a character witness for Ann and Christopher is not pleased. She tells him to get off her back about Tommy’s death or she’ll move Barnes Global, and their unborn babies, to Bermuda. Bobby and Christopher run into guards escorting Vicente Cano to a hearing to deport him back to Venezuela. Vicente looks forward to settling scores with the Ewings, who can’t believe he’s getting away with Marta’s murder.  The prosecution parades a series of expert witnesses whose testimony makes things look very bad for Ann. To top it off, Harris is wheeled in dramatically to continue his mother’s character assassination of Ann, making her sound like a neglectful mother. When it’s Ann turn, she admits to growing up an insecure tall girl who was swayed and flattered by Harris’ attentions but became suffocated in their marriage, which was poisoned by Judith in her twisted efforts to undermine any woman who came between her and her son. Ann explains she had postpartum depression and was on medication when she turned away from Emma’s stroller at the State Fair the day Harris took her. Noticing the toll the trial is taking on Emma, Christopher approaches her outside the courthouse and urges her to speak her truth when it’s her turn to testify. Unfortunately for Ann, that’s exactly what Emma does, confirming she heard Ann’s confession at the hospital and expressing gratitude toward her father for “saving” her from her mother all those years ago! Not surprisingly, the jury finds Ann guilty. 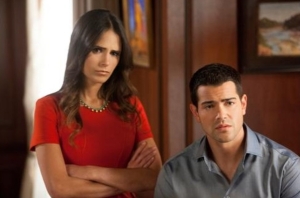 Elena and Christopher are about to feel the sting of John Ross’ wrath.

In other Dallas doings, John Ross advances his plot to take over Ewing Energies by striking out at Elena when his detective breaks a tail light on Drew’s 19-wheeler and watches as Drew is pulled over by cops. A clueless Drew had been hauling stolen women’s fashions for his unknown bosses and gets thrown in jail. Elena promises to bail him out but doesn’t realize that the morals clause in her contract with Sue Ellen makes Drew’s arrest an albatross around her neck that will put her at John Ross and J.R.’s mercy. Elena may have to worry about things on the home front, too, after Christopher and Pamela reach a ceasefire at the courthouse in the wake of the family drama of Ann’s trial. Chris agrees to mediation and is visibly moved when Pamela puts his hand on her expanding belly to feel the kicks of their twins. Cliff is overjoyed that Pammy got Chris to call off the dogs, but his daughter may not be in as much control over her emotions as she tries to convince him she is. She thanks John Ross for warning Cliff about J.R. and Frank’s plot against her but rejects his offer to share a nice dinner. Pamela plans to follow her dad’s orders to the letter this time out. J.R. is impressed by John Ross’ set-up of Drew and says he may forgive his son for teaming up against him with Cliff after all. John Ross couldn’t care less. At the jailhouse, Vicente Cano is led to freedom while Ann is brought in to start serving her sentence. Locked away in jail, she may be the only Ewing safe from what the vengeful Venezuelan has planned!