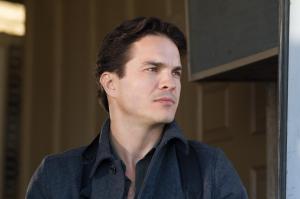 Drew Ramos is not pleased to hear his father’s land belongs to the Ewings now.

The noose around Pamela’s neck gets a bit tighter as the investigation into Tommy Sutter’s disappearance heats up and her enemies plot to bring her down. While she enjoys a round of seconds with John Ross the morning after their tumble in bed, Christopher drags Rebecca down to the police station to file a missing person’s report to turn the heat up on Pammy. Rebecca, however, sees her bread buttered a lot more by siding with Ms. Barnes and interrupts a meeting between Pam and Frank to demand $1 million to keep her mouth shut and leave town. Rebecca orders Frank to make it so but Frankie boy looks like he’d rather arrange a more permanent solution to their Rebecca Sutter problem. When the detective in charge of the investigation into Tommy’s disappearance questions Pamela, she shifts suspicion onto Christopher but he doesn’t buy her act. Some CSI work at Pamela’s old loft turns up evidence of a shooting and Chris texts Rebecca to warn her that she may be in danger from Team Barnes. Becky is stopped on her way out the door by Frank looking none too pleased.  J.R., meanwhile, drops in on Frank to undermine his loyalty to Cliff and propose a joint effort to unseat Pamela from power at Barnes Global by conveniently producing a smoking gun, or in this case, Tommy’s corpse. Elena is another Southfork gal in a heap of trouble. John Ross gets Sue Ellen riled up about Elena’s slow progress in producing oil on the Henderson land by manipulating her maternal instincts. He also makes a generous donation to her foundation, which is bleeding money as contributions dry up in the wake of Sue Ellen’s bribery scandal. Sue Ellen gives Elena one month to show her the oil or pay up on the loan. John Ross, meanwhile, bribes her foreman to take his sweet time trying to hit oil. On the homefront, Elena gets a chilly blast from the past when her big brother Andres, who goes by Drew, shows up at the Ewing kitchen just as she, Christopher and John Ross trade barbs about the upcoming wedding. Carmen is pleased as punch to see her hijito back home but Elena is less than thrilled, with good reason. Drew (played by Kuno Becker) is a moody hunk with an ax to grind upon learning that his mom sold his late father’s land to Bobby. Guilt-ridden because he was with his dad when he died, he is hell-bent on honoring his father’s legacy and vows to make things right. Elena tries to head off any trouble by offering her sibling a job. 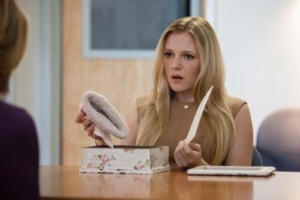 Emma won’t give Ann a chance to prove herself.

Ann is also having family problems. She and Bobby force Emma to meet with Ann at the police station only to be rejected again by the bitter young woman.  Seeing how weird her grandma Judith is, it’s easy to understand why Emma’s so messed up. Ann hints that Judith’s devotion to her dastardly son borders on incest.

Ann settles things with Harris in her signature style.

A frustrated Bobby turns to J.R. for help in bringing down Harris after learning that the police can’t charge him. J.R., showing a new fondness for iPad technology, relishes the chance to use his evil genius to help his baby brother out. Ann, however, has her own plans for Harris. Dropping in on the snake in the grass, she demands to know why he would pull off such a cruel plot against her and is disgusted by his reponse that it was in retribution for her intent to leave him. Harris twists the knife in her gut even more by callously listing the many important moments in Emma’s life that she can never recover thanks to him. Ann responds by shooting him. What did you expect from Dallas’ answer to Annie Oakley?