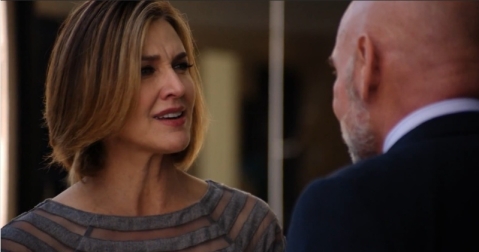 Ann finally learned her daughter Emma is alive, only to be rejected by her.

Battle Lines: The Ewing family comes roaring back to action after the events of last year’s debut season finale and things are mighty exciting on Southfork, as usual. Sue Ellen experiences new highs and lows when her bid to become governor of Texas is shot down by the resignation of the coroner she bribed last season just as she’s winning in the polls. John Ross, still smarting over losing Elena to Christopher, takes a page out of the classic J.R. play book and seduces a girl he meets at her bachelorette party. The morning after, he intentionally runs into her daddy, who happens to be the owner of a fleet of trucks Ewing Energies is interested in buying. When the outraged man refuses John Ross’ offer, John Ross offers to show him a video he made of his tryst with the girl, threatening her socially beneficial engagement. The scene echoes the time when J.R. blackmailed crazy Katherine Wentworth back in the 1980s with a tape recording of their bedroom romp when she was scheming to enlist J.R.’s help to win over Bobby. J.R. is proud his boy followed his advice to get to the man through his nubile daughter. Still, J.R. cautions John Ross not to get complacent in his plot to take over Ewing Energies. He knows that Christopher is trying to win a major contract for his methane technology and notes that Bobby’s son should not be underestimated. Christopher is busy working on ways to promote his methane and recruits NASCAR legend Ricky Rudd to drive a Ewing Energies racecar. Chris has also brought the real Rebecca Sutter to Dallas from Des Moines to testify against Pamela Rebecca at their upcoming annulment trial. Heeding his father’s advice, John Ross has Miss Sutter followed by his private detective.

Elena, meanwhile, is blossoming in her new role as a budding oil baroness. She admits to Christopher that she agreed with John Ross during a blowout between the Ewing cousins but was uncomfortable speaking up. Chris urges her to speak her mind from now on and resumes their frisky swim – sans bathing suit – in the Southfork pool. Elena later buys four non-performing oil platforms from an oil industry veteran with ties to Westar Oil and has an ulterior motive for making the deal. Ann’s ex Harris Ryland slithers into an art gallery where Ann is viewing artwork she commissioned for Bobby’s new office at Ewing Energies and tells her he knows where their long-lost daughter Emma is. He’ll reveal the girl’s location to her if Ann turns over the recording she made of his confession to money laundering during their charged confrontation in last season’s finale. She now has to betray Sue Ellen in order to regain her daughter. Ann confesses to Bobby that her baby daughter went missing over 20 years ago when Ann momentarily turned away from her at a state fair. After DNA results prove the girl, Emma Brown, is indeed Ann’s daughter, Ann gives Harris the tape with Sue Ellen’s support. When Bobby and Ann track Emma down at a horse ranch where the pretty blonde demonstrates her equestrian talents, the stone-faced girl coldly rejects her devastated mother. When Pamela Rebecca returns to Dallas from a short trip to clear her mind, she has adopted a tough new attitude, a dark new wardrobe and an urge to rumble. She summons Christopher to the Barnes Global offices where she reveals to a shocked Chris and Bobby her true identity as Cliff’s daughter by Afton Cooper and promptly demands 30 percent of Ewing Energies as a divorce settlement. An outraged Chris warns her to prepare for a hell of a fight. Unfortunately for Chris, John Ross drops in on Miss Barnes and proposes an alliance against Christopher and Elena, offering up the testimony of Rebecca Sutter as a trump card in the annulment hearing! 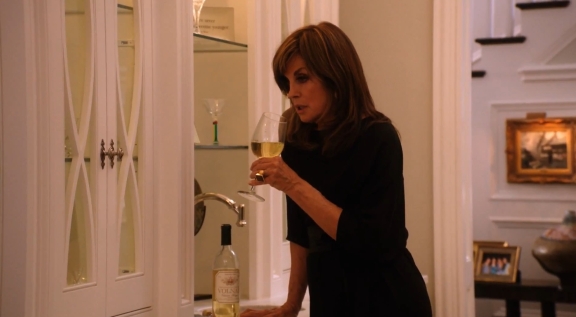 Sue Ellen nearly returned to the bottle after losing her bid for office.

Venomous Creatures: Bobby sets out to investigate where Emma has been living all these years and meets with Harris and their respective lawyers to avoid trouble. Harris stays mum and hints that Ann may have a substance abuse problem. Bobby returns to the horse ranch and learns that Emma’s horse was bought by Harris in London eight years ago. He succeeds in finding Emma’s home where she lives with Harris’ imperious mother Judith (played by Judith Light of Who’s the Boss? and Ugly Betty fame). Bobby spots photos of Harris holding the little girl growing up over the years and figures out that Harris was the one who kidnapped Emma so that his mom could raise her away from Ann. Emma, however, was brainwashed to believe that her father rescued her from her mother and won’t listen to Bobby’s accusations against her grandmother and father. J.R. rides to the rescue of his beloved Sue Ellen, arriving at her home with John Ross moments before she can break her sobriety with a glass of wine under the pressure of losing the election and facing criminal charges. J.R. vows to pull some strings to get her off the hook. He manages to dig up some dirt on the sanctimonious district attorney pressing the case against Sue Ellen and gets him to drop the charges. His heroic deed earns him a spot of tea with the love of his life. J.R.’s still scheming, however, and plots with John Ross to gain leverage over Elena using Sue Ellen’s loan to her. Elena’s savvy deal to buy the four oil platforms netted Christopher a new source of methane and earned her a bigger share of Ewing Energies from the Ewing men. Her move put her in high debt, which John Ross and J.R. plan to use to their advantage.

Pamela flexes her newly revealed Barnes muscles and has a series of confrontations. She steamrolls her way into a Barnes Global meeting led by her father’s right-hand man Frank, earning her a new enemy who doesn’t appreciate being upstaged by a spoiled rich girl. Pamela is unfased. She wins round one with Christopher at the annulment hearing when Rebecca Sutter recants her written testimony supporting Christopher. The judge rules against the annulment. If Chris wants Pamela out of his life he’s going to have to divorce her. Pamela’s victory in court earns her a visit from J.R. himself to warn her that he once successfully vanquished a woman named Pamela from the Ewings’ lives and is prepared to do so again if she continues her father’s vendetta against the Ewings. Exiting her office, J.R. gets a dig in at Frank, calling him a poodle. Pamela moves to cover her tracks and gives Rebecca Sutter a bonus and advice to get out of town fast. Christopher assigns his secretary to spy on John Ross’ assistant so he can keep tabs on his sneaky cousin. Just when things are looking dim for Chris, he gets a supposedly delayed messenger delivery from Tommy Sutter containing cell phone recordings incriminating Pamela in Tommy’s disappearance and revealing Rebecca’s complicity in the original plot to defraud Christopher. Chris immediately plays the tapes to a cornered Miss Sutter. Will she fess up? John Ross sets up his own big strategic maneuver and negotiates a deal with Pamela for 70 percent of the shares of Ewing Energies she stands to win in her divorce from Chris. The two snakes seal the deal with a tumble in bed. What Pammy doesn’t realize is that the smoking gun placed in Christopher’s hands was planted by Cliff’s disgruntled henchman Frank. Welcome back, y’all!

← What will happen on Season Two of Dallas on TNT?
The Morning After on Hulu gives Dallas newbies a video speed course on Dallas history →